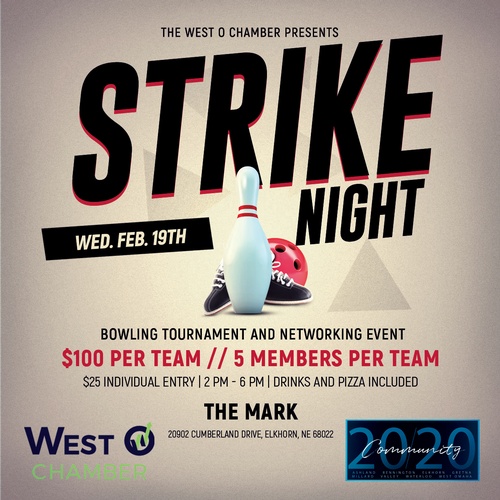 This year we will have teams of 5 competing in the first ever Strike Night involving the West O Chamber, the Valley/Waterloo Business Association, the Ashland, Gretna and Bennington Chambers as well as the Millard Business Association. Each team will play 5 games with every player bowling two frames in each game. It will be up to the teams to strategize and decide on which frames each player will bowl and then at the end of the 5 games we will tally up the scores and see who the top 6 teams are. Those teams will then compete in a 1-game tournament with the winning team moving on until only one team survives!
Event Sponsors:
Location:
Wednesday, February 19th
The Mark
20902 Cumberland Dr (NW of 204th & Dodge)
Elkhorn, NE 68022
Date/Time Information:
Wednesday, February 19th
2pm Registration & Networking
3pm Bowling
5pm Tournament Begins and Open Bowling
6pm Prizes and More!
Contact Information:
Send an Email
Fees/Admission:
$20 Per Person or $100 Teams of 5, please add additional attendee for each teammates name and email address
Includes: 5 Games, Shoes, Food & Prizes
Must Preregister
Set a Reminder:
Business Directory Events Calendar Hot Deals Job Postings Contact Us Weather